Danny Cowley has challenged Sammy Ameobi to start scoring more goals for Nottingham Forest after a fine showing against Millwall at the weekend.

The Reds have seemingly turned a bit of a corner under Chris Hughton with them on a good unbeaten run and the 3-1 win over Millwall was certainly a decent performance.

Indeed, Ameobi was the star of this particular show at the City Ground with a brace of well-taken goals and Cowley has urged the winger to start showing more of that in Garibaldi red.

He said, via EFL on Quest:

“Two fantastic goals for Sammy Ameobi, coming in on his left foot he’s always dangerous and he probably doesn’t score as many goals as he should, given his quality.

“But this second goal is probably the goal of today, bending it exquisitely into the top corner.”

It’s fair to say that Ameobi has taken a bit of stick from Reds fans during his time at the City Ground but, in fairness, a lot of the players have given the quality the squad at the the club and the below-par results.

However, things do seem to be getting on a better plane and Ameobi will be looking to show what he can do in the coming weeks and build on this result.

He can be an explosive player at times, he just needs to be that bit more consistent.

Fans can watch EFL on Quest’s flagship show each Saturday from 9pm with midweek shows throughout the season on EFL matchdays. Quest is available on Freeview channel 12, Freesat channel 167, Sky channel 144 and Virgin channel 169 while fans can catch up on the show on-demand via https://www.discoveryplus.co.uk/show/efl-on-quest 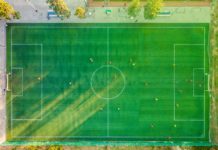